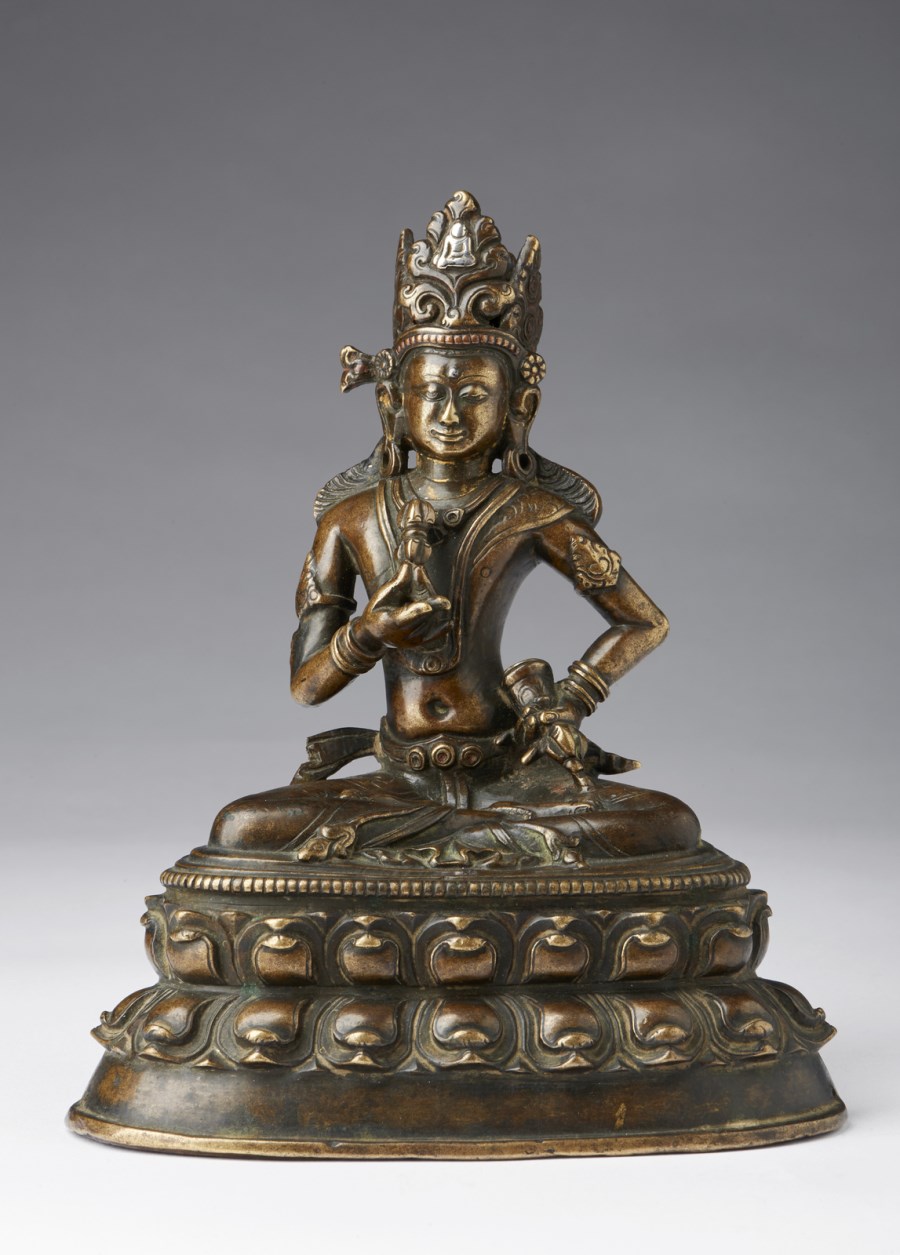 Significant statue made of high percentage copper alloy depicting the primeval Buddha, Vajrasattva. Here he is portrayed with precious jewels and an unusually slender and thin bust. He sits cross-legged in the Padmasana position on a double lotus flower base with large petals. In his left hand he holds the Ghanta bell and in his right the Vajra, which are his icons. The figure is embellished with copper inlays at the junction of the high, elaborate crown, and silver decorations embellish the corneas and third eye. There are also traces of gilding on the neck and a small silver Amitabha Buddha at the very top of the headdress. Note the work's overall impression of what is probably an Indian stylistic influence, and the refined embroidered finishing touches on the back of the robe. Also note the two elephants adorning the bottom of the base and the remains of an attachment, suggesting the previous addition of a halo. Provenance: Private collection Milan, Italy. Previously belonging to the well-known Nyingjei Lam Collection. Published in: Himalayan Art Resource, item no. 68317. Sotheby’s, “The Heart of Tantra - Buddhist Art Including Property from the Nyingjei Lam Collection”, Hong Kong, 3 Ottobre 2017, sale number HK0749, lotto 3117. Exhibitions: Ashmolean Museum, Oxford, 1996-2005, on loan. The Sculptural Heritage of Tibet: Buddhist Art in the Nyingjei Lam Collection, Ashmolean Museum, Oxford, October-December 1999. Arte Buddhista Tibetana: Dei e Demoni dell' Himalaya, Palazzo Bricherasio, Turin, June-September 2004. Rubin Museum of Art, New York, 2005-2017, on loan. Casting the Divine: Sculptures of the Nyingjei Lam Collection, Rubin Museum of Art, New York, 2012-2013

Do you own a lot and you want an evaluation?